With the Kysrium Pro Allroad Disc, Mavic has gone to a 19mm internal width, and is selling the wheelset complete with 30mm Yksion Elite Allroad tubeless-ready tires. 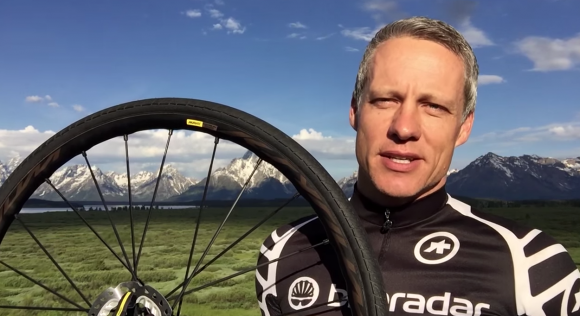 So why wider? Yes, it’s a trend, but there is something to it. A wide rim and a plump tire can yield better traction, better suspension and, to a certain degree, lower rolling resistance. When rattling around on dirt and gravel roads, bigger is usually better.

With tires pumped to 80psi, the Allroad wheel/tire system did a great job on the lonely country roads, soaking up some of the smaller bumps and genrally defying the sharp rocks and gravel. Neither of us flatted, but a few others in our group of 35 or so few certainly did.

As with other tubeless tires, sealant in the Allroad tires can patch tiny punctures like those caused by thorns or staples, but large cuts or gashes still result in flat tires. With about 60 of the 80 miles on pretty rough dirt roads, our test ride was an ambitious test, honestly. And of course you can use tubes with the Allroad system.

The wheels themselves held up just fine, reacting quickly in the often choppy conditions, and shining with lateral stability when cornering hard in ruts. No matter how loose or fast the gravel roads were, we never felt out of control. Part of that is certainly due to the Shimano hydraulic brakes, and part down to the Cannondale Synapse test bikes were used. (Sidenote: The Synapse's slender 25.4mm seatpost provides a welcome bit of flex on rough roads.)

The subtle shoulder tread gave surprisingly good directional stability in the loose stuff, with plenty of feel and control. But once back out on the pavement the tires didn't feel sluggish at all, with no tall shoulder knobs to wear down.

At $1,250 / £750, the wheels aren’t cheap, but the tubeless tyres are included in the price. Mavic claims it doesn't yet know which companies if any will spec this on their bikes for 2016. But if our one big ride in the Grand Tetons is any indication, the Kysrium Pro Allroad Disc is a solid solution for adventure riding.