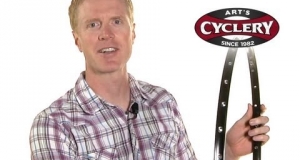 H Plus Son makes some of the finest rims on the market. Incredible attention to detail, quality, and forward thinking designs have made them... 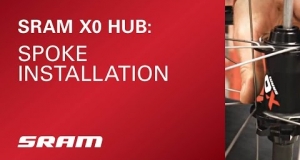 This video will show you a method for loading spokes on to SRAM XO hubs when you are building wheels.

XO hubs have a unique flange shaped design, which yields a much stronger and robust... 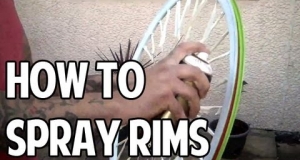 DIY How to Spray Paint Your Bicycle Wheel Rims

Today, I’m going to show you how to paint your rims. You’ll need a roll of masking tape, a 15mm socket set, and a plastic tire lever. 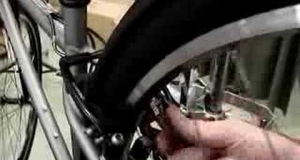 Today, we’re going to show you how to true a wheel right off your bicycle. This isn’t what is normally done at the shop, but if you’re at home or out on the trail you can touch up your wheel and... 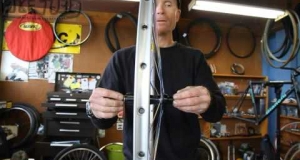 How to Dish a Bike Wheel

In this vid Mike shows how to use a dishing wheel to make sure your bicycle wheel is properly dished.

A typical dishing tool is simply a gauge that allows you to set the distance from the... 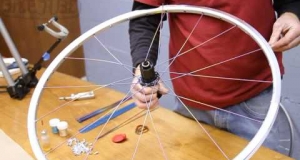 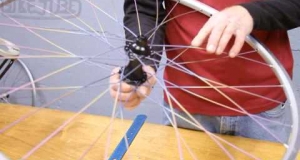 Mike finishes up lacing the 32 spoke rear wheel by lacing the non-drive side spokes. Note the parallel spokes that connect on each side of the valve hole. By now you might need to use a spoke... 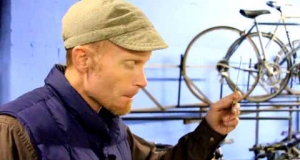 Build a Bicycle Wheel: How to Spoke Prep

A vital step in bicycle wheel building is prepping the spokes with some kind of spoke prep.

There are two reasons to prep spokes: 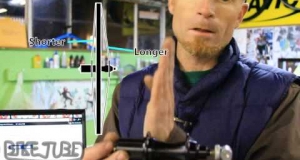 In this first video we will determine the spokes length we need to build the wheel. First select your hub and... 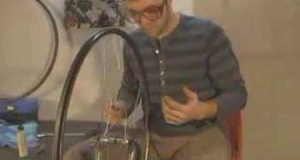 Putting the finishing touches on the wheel.
First:Now the spokes are beginning to tighten up nicely and the kinks in the wheel are becoming gradually smaller. Continue to... 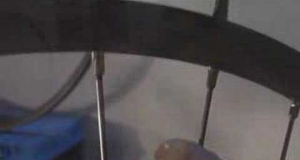 ....without a truing stand.
We wanted everybody to be able to build a wheel without buying an expensive truing stand, so just use the front fork. This video shows the process of truing.... 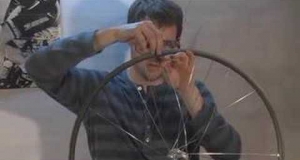 Lacing the last 18 spokes to complete the lacing of this 36 spoke wheel!
First:Take the next set of spokes and drop them through the remaining holes from the outside of the... 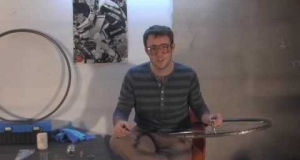 1. Find the extra hole for the valve stem. This will act as a guide and help you keep track of where you are along the rim. It is also important to look through the holes on the... 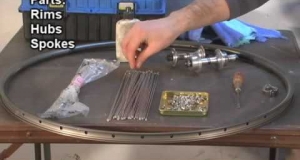 Part 1: How to Build a Wheel, Basics of Wheelbuilding (36 Spoke Wheel)

In this series we give you the basics of building a 36 spoke wheel. We begin with lacing the wheel, then show you the process of truing the wheel. So get everything together and make some time...

The rim is the outer hoop structure of the bike wheel. There are holes drilled into the rim to fit tension spokes that are attached by nipples. It has a special concavity with allows for the bead of a rubber tire to sit, therefore making a seal between the inner tube and the outside.

There are several designs for the wall structures of rims, and they come in a variety of materials. These include durable, low density metals and carbon fibers. Rims come in many different sizes based on the wheel being built. Mountain and road bike wheels each have different qualities that make them perform better. Rim repairs can be difficult to perform and may require special tools.

On Amazon.com one can find almost any accessory to go with the bike rim or a wheelset in general. This includes rim tape, rubber cement and sealants, valves, rim hole adapters and so much more.

Most rims are made from aluminum, but other alloys and carbon composites exist. This is because aluminum is a lightweight and somewhat durable metal that is resistant to rust. Building a wheel is a cheap but challenging option. If you're really on a budget, some rims cost around $20. Strong, straight wheels are important in the efficiency of a smooth ride. If you decide to take on the task of building a wheel, a high-quality rim is the place to start.

Performance carbon rims are super lightweight and precisely engineered for the strength competitive cyclists need. For that reason, many can be several hundreds of dollars. The sky's the limit, so buy what best suits your outfit.

Assembly of a wheel starts with the big three: hub, spokes, and the rim. You will need a spoke wrench, truing stand, a flathead screwdriver, and a lot of patience. Wheelbuilding is an art.

This is the Rim page. For hub selection, go to the hub! The type of wheel you are building will influence the hub size, number of spoke holes, and flange girth.

On average, wheels have 32 spokes. There's variation, but keep in mind that with fewer spokes requires a bulkier rim and hub to handle the tension spread out farther. Nickel-plated brass spoke nipples are commonly purchased with the set of spokes.

Let's get started: It's a great idea to lubricate spoke threads, holes and nipples during assembly. Having grease on these spots allow the nipples to reach high tensions (super important). After that preparation, it's time to start lacing the spokes.

NOTE: This is just one of many ways to lace spokes.

Spokes are laced in groups. The first place to start is aptly named the key spoke. If a mistake is made on the first spoke, the others will all be assembled in correctly. It goes next to the valve hole on the rim and through the hub flange, inside to outside. Spokes are set trailing the freewheel around the circle. Along the rim, spoke holes are drilled offset to each other every other hole. They are a little forward from the corresponding hub flange to accommodate the trailing style that spokes are laced. Looking at the wheel from the drive side, the spokes should go clockwise.

Loosely attach spoke nipples to hold the spokes in place. Don't tighten until al the spokes are in the rim and ready to rock. On a 32-spoke wheel, the spokes are installed in groups of 9. They should be evenly spaced, and wired to the same side on the rim as the corresponding hub flange. When the first group is in place there should be a spoke, 3 empty holes, another spoke.

Next comes the 2nd group. It should follow the holes behind the 9 first spokes in the same flow. The first spoke of the second group goes into the first hole opposite the key spoke. After this group there will be 18 spokes in the wheel, all up to this point have been trailing spokes.

The third and final group is a leading group. The spokes will insert the opposite direction and cross 3 of the trailing spokes before finding their home. Remember to keep the spokes in holes on the same side of both the rim and the hub. Install the remaining spokes this way to complete what is called a normal cross 3 pattern. Now the spokes will need to be tensioned properly.

If you are still unsure, check out the great bike tube tutorial on how to build a wheel. It really breaks it down and there's a lot of humor to keep you awake.

Repairing bent rims (called truing) can be one of the most difficult tasks to do on a bicycle. If the rim is bent, or it's noticed that it is coming close to touching a brake pad, your wheel probably needs to be trued. Bringing the rim back into balance takes attention to detail that's mostly learned from building wheels in the first place. Patience is key, so if you're ready to bring that wheel back from the dead, here are some tips:

Take a deep breath and don't rush anything. If there is a small flaw in the rim, you can find it by shining a light on the rim. In the reflection you will be able to find where the smooth stops and the trouble starts. Before messing with any spokes, try to hit the rim lightly with a rubber hammer to flatten the bump. Remember that you are working with very light metals, and overcorrecting can give more headaches than you might be ready for. Be gentle.

When corrections are made to a small part of the rim, it affects the geometry of the whole thing. Work around the rim making even, small turns of the spoke nipples. Constantly check that spoke tension is even with your fingers. They should bend only under significant pressure. Broken spokes will be apparent.

One thing to consider is that if the rim is severely dented, simply tightening loose spokes will only further deform the rim. Use a hammer to get the rim as close to round as possible before tightening spoke nipples. When a loose spoke is found, sometimes it is helpful to check the adjacent spokes at the same time. Covering more spokes makes a more uniform, round area of the rim.

And finally: don't be a hero. If you have made many adjustments at very small increments and the wheel just doesn't seem to come into balance, take it to a professional. Solving the problems early and without too many adjustments will keep from further weakening the rim.

Before standardization of wheel sizes, it was an extension of the wild west. Companies made rims sizes they thought were the best, and the rules changed from one region of the world to another.

The International Organization for Standardization (ISO) and the European Tyre and Rim Technical Organization (ETRTO) developed definitive sizing scales and measuring procedures. This eliminated a lot of confusion in rim and tire compatibility worldwide. The ISO system uses two numbers:

The first is the outside width (or diameter) of the rim in millimeters. Aside from purchasing a tire to fit the rim, this measurement is an important figure to determine if a rim will even fit in the fork dropouts.

The second number is the most critical. It's the diameter of the bead seat of the rim (BSD) in millimeters. If this number matches, the tire will fit onto the rim. The bead seat is a step just on the inside of the rim where the inside lip (seat) of the tire sits. For the tire to fit the rim properly, the bead seat diameter must match. If the tire is too narrow for the rim, there's a higher risk of damaging the wheel from debris on the road. Likewise, if the tire is too wide for the rim, there will be increased wear on the sidewalls of the tire and greater risk of a blowout.

NOTE: Remember to avoid error in the measurement, use a wire or tape measure made of metal (fabric tapes stretch).