The FiberFix is a kevlar chord used to fix a broken spoke in an emergency situation. Breaking a spoke is a rare occurrence, but it can happen while you are out on the road, so it would be a good idea to carry one of these emergency fix kits especially if you are going on a longer ride or a tour. The kit includes a spoke wrench, kevlar spoke itself with a little cam adjustment on top, and a spare spoke nipple.

The first thing when you break a spoke is to remove the broken spoke. This will require you to take off the tire and tube. When it is removed, leave the spoke nipple in there. If it’s gone, use the extra from the kit. Then take the kevlar spoke, and screw the cam piece side into the nipple. Just a couple turns. Run the kevlar spoke down to the spoke hole in the hub where the broken spoke came out of. Lace it through that hole and bring the extra back up to the cam piece. 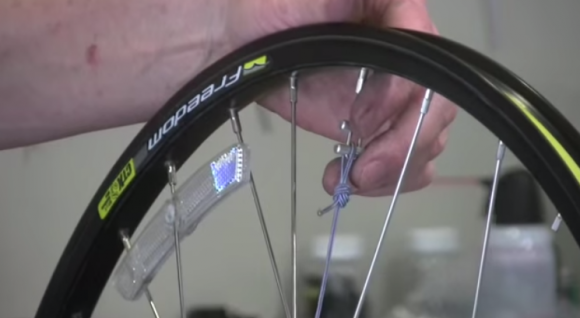 Bring the kevlar line back up, over the top roller, between the two rollers, and back through the bottom of the J piece. Once you weave the chord through the cam piece, tighten the cam piece a few more times by screwing it into the spoke nipple. Then take the spoke wrench and use it to prevent the spoke nipple from turning, while you tighten the cam piece. This is essentially twisting the two strands of the kevlar chord, tightening it, and pulling your rim back into alignment. Continue to tighten it until the rim is straight enough that you can ride it again to the nearest bike store or home. Wrap the excess chord and tie it off securely. 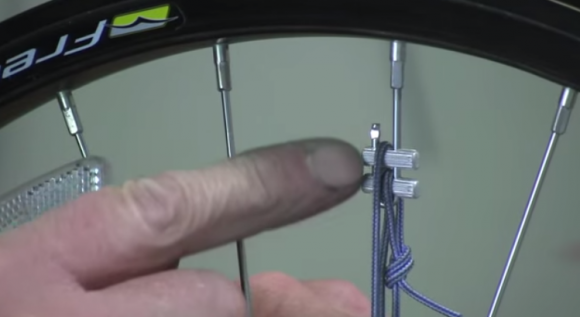 It can be a good idea to carry two of these emergency fix kits since one broken spoke can often make other spokes break easier than normal by putting added stress on adjacent spokes.