About The Bike: The Century Sport Disc is an aluminum bike with a full carbon fork. This bike is designed with the high-mileage enthusiast in mind, and it shows it with a nice and relaxed geometry that feels easy on the back and neck without feeling like you’re riding an upright beach cruiser. It’s outfitted with a mix of Shimano parts—sporting 105 shifters and front derailleur and an Ultegra 10-speed rear derailleur, and TRP’s Hy/Rd mechanically actuated hydraulic disc brakes. 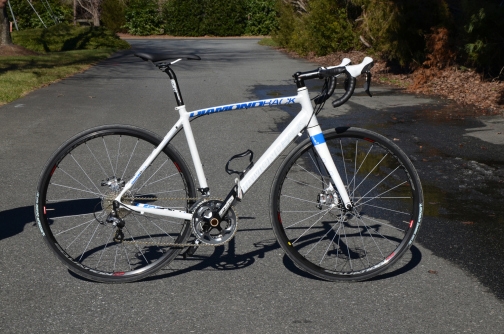 Unboxing and Set Up: Unboxing and set up are fairly straight forward: the bike comes 90% assembled, so you only have to mount the wheels, handlebars, and seatpost. The only tools you’ll need are a set of hex wrenches and some bike grease. As with most bikes, the rear derailleur will need a bit of tuning—but compared to some other bikes we’ve assembled, it was minor– just two quarter turns of the barrel adjuster. The only major obstacle came with the brakes. We’ve set up disc brakes before, but these took some figuring out to get set up. Turns out it was maddeningly simple. So to save you a headache, here’s the key: look for the knob with a picture of a lock on it. Unthread it counter clockwise until it pops up out of the socket. This will unlock the actuating arm. Once that is done, proceed much like you would with any other mechanical disc brake set up (pinch the actuating arm to activate the brake, pull the cable tight, and tighten down the cable clamp bolt, then use the barrel adjuster to back off the cable tension until the rotor spins freely).

The Ride: Our first ride on the Century Sport Disc started out with a group ride that turned into a two-man exploration of some local gravel roads. Over this varied terrain, the bike proved surprisingly fast, and it climbed fairly well. The feel of the bike also impressed. Being an aluminum frame with an alloy seatpost, we expected a harsh, jarring ride, but that turned out not to be the case at all. The bike nicely soaked up road vibration and delivered a smooth road feel. Even on some rutted out gravel the bike felt stable, thanks to its long wheel base and the unexpectedly excellent tires (some nice, sticky Michelin Dynamic Sport 700×25’s).

Shockingly, we also found the saddle among the most comfortable stock saddles we’ve ever tried. Usually, the saddle is the first thing we discard when setting up a new bike, however for us the Diamondback Equation saddle (135mm wide) hits that nice sweet spot of just enough padding, just enough flex, and not being too wide or too narrow. The shape is also pretty middle of the road, with a nice graceful curve from the rear to the nose that didn’t rub on our legs or cause any hotspots. The center channel cutout also helps with numbness. (Our reviewer normally rides a 134mm Prologo Nago Evo saddle).

The carbon fork and BB386 bottom bracket definitely helped stiffen the bike up, which helps with performance by improving power transmission and minimizing frame flex. It’s not quite on par with a carbon bike, but for what this bike was designed for, it’s more than adequate. The geometry is a little more upright than we’re used to, but it actually felt pretty good on the back and neck. Sitting more upright did make us work a little harder when riding into the wind, but we were more than able to keep up with a fast group ride without any problems. It’s important to remember though that this isn’t a race bike—this bike is built for those putting in long hours in the saddle. 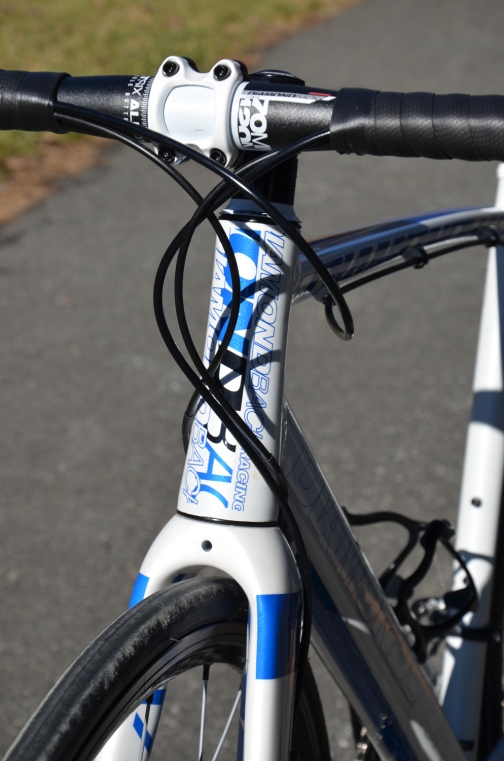 The tapered headtube and carbon fork helped stiffen up the bike

The handling was nice and stable, with no hints of the twitchiness we’ve come to expect from more racy-steeds which sometimes have pushed us to the edge of our comfort zones. On gravel roads, the bike was responsive enough to help us ditch some pot holes at the last minute, and even bunny hop others that we saw a little too late. The bike is spec’ed with slightly wider bars than normal (44cm on a 54cm bike, versus the usual 42cm) to give the bike a more stable feel akin to a flatbar road bike, but with the ability to ride in the drops. Handlebars are fairly inexpensive (a set of Forte Team alloy bars are about $39), so if you want to switch to a narrower bar for more nimble handling, it won’t break the bank.

Now for the disc brakes: our bike arrived the day that SRAM announced their hydraulic road recall. Even though the TRP Hy/Rd is a fundamentally different system, we still eyed the fluid reservoir with not a little apprehension. Fortunately, our fears were unfounded. The bike stopped on a dime without a single hiccough, even on gravel roads and steep descents. In fact, sometimes it almost worked a little too well. If you’re used to traditional road calipers, then you’ll need to remember that “less is more” with disc brakes. Because the system is mechanically activated (the cable actuates the hydraulic piston, which actuates the braking arm), you don’t really have to worry about boiling the fluid on long descents, and the sealed hydraulic chamber has almost no chance of developing the air bubbles that brought down SRAM’s systems. They are definitely powerful, and performed well even in wet, muddy conditions we encountered on gravel roads. 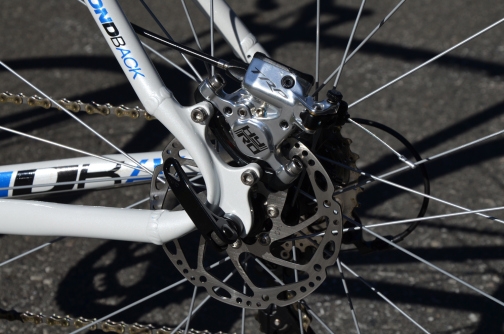 The Verdict: The Diamondback Century Sport Disc is an excellent bike for riders looking to put in long miles, ride in bad weather, or looking for a first road bike. Even our less experienced testers felt right at home on the bike, thanks to its stable handling and the confident braking feel they got from the Hy/Rd system. The spec is decent for this price range, with the high-end Ultegra rear derailleur, BB386 bottom bracket system, and TRP hydraulic system all normally found at a much higher price point. However, if you’re looking for a bike that’ll climb like a champ or that will help you take the town line sprint, then you may instead want to look at the Diamondback Podium series to get that extra performance edge. A racing bike, this ain’t. But for Gran Fondo’s, charity rides, and club outings, this is a bike that definitely has the chops to help you stay with the group without pushing you to the limit.

Recommended Upgrades: As it is the Century Sport Disc, is a great bike. However, if you want to get a little more out of it, here are the upgrades we would recommend.

How to Use Threadlocker to Secure Bolts on Bicycle

How to Assemble a Ritchey Break-Away Bike