It's probably the most iconic sequence in cycling cinematography, the opening scene from the 1977 documentary "A Sunday in Hell" about Paris-Roubaix. It shows a mechanic washing a team bike, and that's a scene that you're going to see repeated dozens of times over at any team hotel after a professional bike race, today thirty-five years later, for several important reasons. First of course, they need keep the bikes looking good for the team sponsors, but they also need to make sure that the bikes work as well as possible, and a clean bike is always going to work better, and it's also going to last a lot longer. Because that grit tends to wear away bike components, but most importantly cleaning a bike lets you get a really close look at and inspect it and spot any problem areas that might cause you trouble down the road. So for that reason I encourage you to wash your bike at least once a week just to keep an eye on things, make sure nothings going to fail on you by surprise.

To clean your bike, you're going to need a few basic tools. The obvious ones are: a bucket with soapy water. I'd like to use warm water, but I just use dish soap, nothing fancy, and of course, a hose, so you can rinse stuff off. Now to actually clean your bike, you'll need a couple of sponges, a nice soft bristle brush that can get into the nooks and crannies, a harder brush for getting up the chain and things like that and, it's kind of handy to have one of these brushes that gets in between cogs and things like that, and you're going to want some degreaser (this is orange peels citrus degreaser made by Pedro's, good stuff it won't damage the frame's paint and you've got the bearing seals that's really important) and something to put the degreaser in, just cut off an old water bottle, and something to apply it, some old paintbrush, and of course a couple of towels and rags are really handy to have as well. A couple luxury items: I guess this is a chain holder, this keeps the chain turning smoothly without scratching the frame paint, and the most expensive item is a repair stand. This is a park fork mount stand. I highly recommend it because it lifts the bike off the ground so you're not bending over all the time, which is better for your back and also lets you get things without too much difficulty. It just makes cleaning a lot quicker and more convenient.

Here, I'm using my cyclocross bike to demonstrate. As you can see it's covered in grit and mud. When a bike is this dirty, the first thing you should do is use the hose to rinse off most of the dirt so it's not there to scratch the frame as you wipe it down with a hose later. Next, I mount the frame in the stand. Mount both wheels on and install the chain holder. This isn't essential, but it does make cleaning the bike easier, and keeps the chain from scratching the paint. Now I pour a little degreaser into the cutoff water bottle. It's really convenient to put this in the seat tube water bottle cage so it doesn't get knocked over while you're working on the bike. Then I use the paint brush to apply the degreaser to the chain, the chainrings, and the derailleurs. The parts should be dry before you apply the degreaser, and it's important to let it soak in for a few minutes. You should also put the degreaser on the cassette. Try to lean the wheel so the cassette is facing downwards so the degreaser doesn't drip on the tire or onto the hub bearings. Using the stiff brush I then scrub the parts with soapy water. It really helps oily residue. Don't forget to scrub the casette. Now it's time to clean the rest of the bike. With the sponge and soapy water, I start with the highest point of the bike and work my way down. Make sure to clean the bike from both sides and don't forget to get in behind the fork and under the bottom bracket. Use the soft bristle brush to get into the more intricate parts. I also like to run the chain through a soapy sponge. If I also use a soft bristle brush to clean the rims and the tires so it will be easy to cheack for cuts later on. Clean the hubs between the spokes to with a soapy sponge.

Apply Degreaser with a Brush 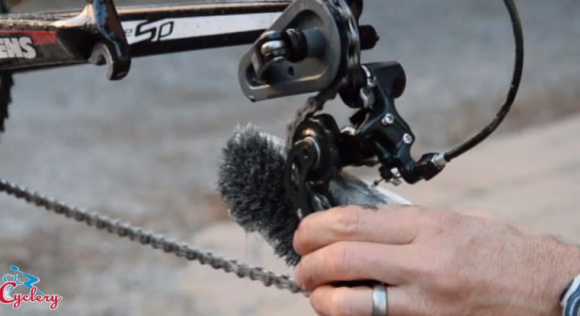 When it's time to rinse the bike, start from the top down again. Aim the hose downwards. Avoid spraying directly into any of the bearings. You'll find that they last a lot longer if you avoid doing that.

To finish off, I use an old towel to wipe the saddle, handlebars, and the frame down, so they all dry a bit quicker. I also try to dry the chain off, so it doesn't get any chance of rust. Then it's time to put the wheels back on the bike, and let it sit for a while. Here you can see just how clean the bike gets using this simple method. Now you can give it a once over and look for any problems. All you need to do is lube the chain and maybe the polish and sand some other vital parts that start to get sticky after a while and check that the gears work and you're off to the races for the cycling.

How to Use Threadlocker to Secure Bolts on Bicycle

How to Assemble a Ritchey Break-Away Bike