A bent bicycle fork can happen in a number of ways - a bad wreck, a big bump, being backed over in the garage, etc. What's weird about these instances is that the bike can be bent in a split-second but as riders we often trudge on after the fact with our crooked forks. A bent fork is not only an unsightly attraction, it also makes pedaling harder and wears down tires, brakes, and other equipment unevenly. While a fork replacement is an option, another approach might be to try and bend the unit back into place first. Here's how to salvage that fork, or at least attempt to:

** It should be noted that the best method of approach is to replace the fork altogether. One that is bent has metal that is compromised and is more vulnerable in the future. That being said if the bend is minimal or you want to make a last ditch effort to restore a bike that's been in storage for years then follow these tips ** 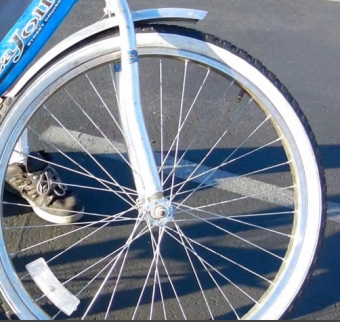 One of the reasons to get in good graces with your local bike shop is because they'll likely let you borrow rare tools for a day without charging you too crazy for them. For many people it's not worth the money to buy a truing stand and similar tools you might only use once a year if that. One such tool is a fork straightener. Back in the 1960's when most bikes were made of steel, fork straighteners were a regular part of a repair shops arsenal. There's a good chance that your local will still have one around today, or at least know somebody in town who does.

The fork straightener is weird - it's both self-explanatory yet kind of difficult to use at the same time. Flip the bike upside down and set the grooves into a fork opening with the other end at the bottom of the bike frame. The straightener works much like a car jack in that it moves just a little bit at each hydraulic pump. Click the handle until the forks bend slightly past their original point because they will bounce back. Flip the ratchet switch in reverse so that the tension is relieved and remove the fork. 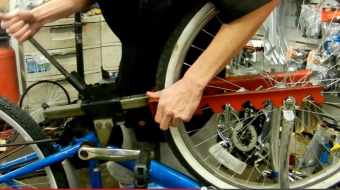 The fork straightener will take a minute to get accustomed to but is easy to operate after a bit.

Remember that you're now driving a bike with forks that aren't as sturdy as they used to be so avoid going out of your way to hit a curb or jump, otherwise you should regain 100% ride-ability.

How to Route Brake Cable Hose on RockShox RS-1 Fork

How to Install a Cane Creek Threadless Headset

How to Install a Star Nut in a Bicycle Fork

How to Set Up Mountain Bike Suspension Fork

How to Install a Sealed Bearing Headset