Today, I'll be showing you guys how to remove your fixed gear cog, but I will show you how to remove it without any special tools. Only tools you'll need is a screwdriver or some sort of pointy pic and a hammer. So we have a lockring, which is the silver thing and an actual cog, which has the teeth. So what you're going to want to do is remove the locking first. For the lockring you would need a special tool, about 20 bucks, and for this the cog you need a chain whip, about 15-20 bucks, so in total I'm saving you about 30 bucks.

The locking is counter threaded. That means left is tight and right is loose. To loosen it up, you want to go to the right. You want to put the screwdriver in the groove, as you can see the lockring has some grooves. We're going to hit it right, to loosen it. This is loose, but some are really hard to take off. You want to hit hard enough to loosen them.  Once the lockring is off, you're left off with the cog. You're left with the cog.  This one is normal threaded so right is tight and left is loose. So you are going to spin it to the left. You want to take your screwdriver, which works best, and put it not on the tip of the tooth but lower in the groove, so you don't chip your tooth. Loosen it up by hitting the screwdriver hard with the hammer. Many people say this doesn't work because you can't get it tight enough, but I have had no problems, and even if you can't get it very tight, pedalling forward with the lockring on will help tighten the cog. 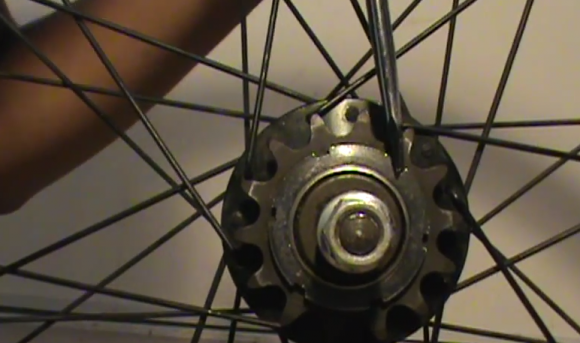 As you can see, to put it back on there are two grooves. On the freewheel side, there is only one groove. The two grooves are for the lockring and the cog. Once you are done, changing the gear ratio or cleaning, to put it back on it is the same kind of thing. Put the cog on first and tighten it with your handed. Then use the screwdriver and hammer to tighten it really good. Hit it as hard as possible. Then put on the lockring, which keeps the cog from moving. To tighten the lockring, thread it on the opposite direction, left is tight, and use the screwdriver and hammer to tighten it up again. 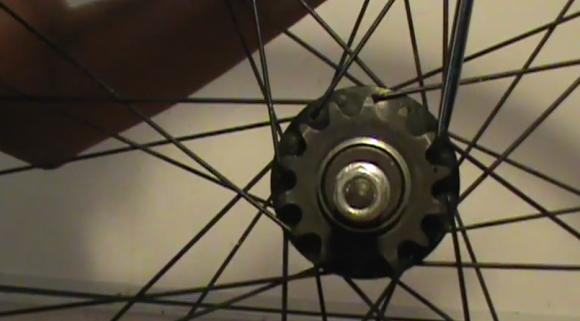 Tighten by Hitting Cog in Opposite Direction

Removing Water From Inside A FLO Bicycle Wheel

How to Install a Wheel in Vertical Dropouts

An Explanation of Attached and Detached Air to a Wheel

Remove a Tubular Tire and Excess Glue from Zipp Rims

How to Remove Rust from Your Bike

DIY How to Spray Paint Your Bicycle Wheel Rims

How to Install Fenders on a Bike